Funerary Inscriptions of Jews from Italy 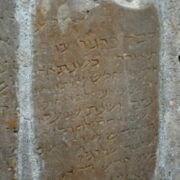 ‘Funerary Inscriptions of Jews from Italy’ is an interface for a database that contains over 800 Jewish epitaphs, dating to the 2nd – 11th century CE, from Rome and Southern Italy, built by Jelmer van Nuss for dr. Ortal-Paz Saar, a renowned specialist in religious studies and Jewish cultural history. The project is part of a larger initiative which aims to bring together three epigraphic databases. Partners are Epidat, containing over 32000 Jewish epitaphs, dating to the 11th-21st century, primarily from Germany and Inscriptions of Israel/Palestine with 3000 inscriptions, dating to the 6th century BCE – 7th century CE from the Area of Israel and Palestine. In the future the three databases will be merged into one large portal, all built observing the EpiDoc standard for ancient documents.