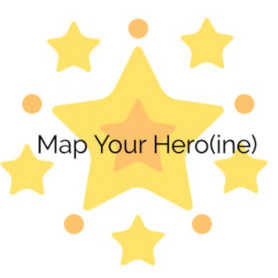 Map your hero(ine) is a small-scale project for which the Digital Humanities Lab developed a web application with a database, online survey and visualizations. The research revolves around the fictional characters who are role models in the lives of people.

The project wanted to map the representation and adaptations of these heroes and heroines over time. Another aim of the project was to use the application in a course with students, let them participate in the research and have discussions about it.

To investigate the representations of hero(in)es in various works and adaptations, the developers have set up an online survey with visualizations of the results. This survey has factual questions like the character’s name, gender and what work they featured in. In addition, it asks questions about the reader’s personal reaction.

Participants contribute to a knowledge bank of fictional characters. For example, when someone fills in a response to a particular character, that character and the work they featured in are added to the database. Future participants can then easily select the same character and add their personal reaction to it.

The DH Lab has made the web application and the survey from scratch to implement the technical possibilities needed for this research. Standard survey software didn’t provide the needed features, like the ability to check automatically whether similar responses are about the same works and characters or about the adaptations. For example, Star Trek (1966) and Star Trek (1969) would refer to the same TV show, but Star Trek (2009) is an adaptation.

Another thing the developers added on the website are visualizations to make the survey more exciting for people to participate in. Simple graphs show what responses were given to each question in the survey and the interaction ability to compare between characters and gender, or between source works and adaptations.

Adaptations of characters over time

The applicant was particularly interested in adaptation of characters of time. When participants fill in factual questions about works that are adaptations, they can pick the source work from the works that are already in the database. So the survey results allow the researcher to easily compare adaptations to their source works, and see how the traits of the hero or the reader experience change in adaptation. For example, the survey asks some questions about how readers perceive the agency of the main character. You could then easily investigate a question like: Are female characters given more agency in adaptations compared to their source work?