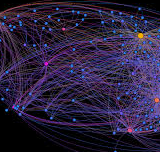 The Fieldnotes Gephi Plugin was built for the Datafied Society platform. Gephi is a much used graph visualization and analysis platform that is quite easy to use.  Fieldnotes is a much needed feature that logs the Gephi settings that were deployed for individual visualizations, thus making network visualization in Gephi accountable. An article on Fieldnotes was published by Wieringa et al.